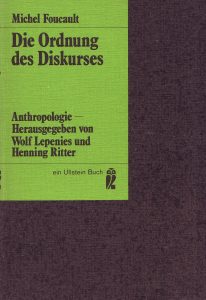 ‘If Man is dead, everything is possible!’ – an early interview with Michel Foucault

Roughly a decade before publishing his two most famous treatises on power – Discipline and Punish: The Birth of the Prison (1975) and The History of Sexuality, Volume One (1976) – the French philosopher Michel Foucault rose to prominence with The Order of Things: An Archaeology of the Human Sciences (1966). Written as existentialism fell out of favour among French intellectuals, the ambitious work sought to define a new philosophical epoch in which knowledge could be best understood as arising from ‘large formal systems’ that change over time. In this 1966 interview with the French television broadcaster Pierre Dumayet, Foucault discusses ideas from The Order of Things, including why he believed that Jean-Paul Sartre’s emphasis on the individual made him ‘a man of the 19th century’, and why ‘the disappearance of Man’ presented an exciting opportunity for new moral and political systems to arise.

From the Library of Human Sciences we present „The Order of Things“ by Michel Foucault. 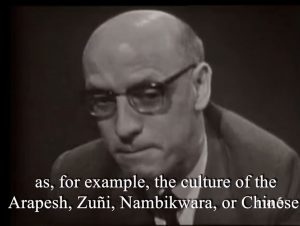 Pierre Dumayet: Mr. Foucault, you ‚ve done work as an ethnologist, an ethnology of our culture you say. What do you mean?

Michel Foucault: Well, I would like to consider our own culture to be something as foreign for us as, for example, the cultur of the Arapesh, Zuñi, Nambikwara, or Chinese. Of course, we’ve been trying for a long time through the work of historians or sociologists to grasp our culture as an object, as a thing there in front of us. But historians mainly study economic phenomena, sociologist study emotional, political, sexual behaviour. I believe that, until now, we ‚ve never considered our own knowledge a foreign phenomenon. And what I tried to do was deal with it as if it was sonething before us as a phenomenon just as foreign and distant as the culture of the Nambikwara or Arapesh, for all Western knowledge formed since the Greek age. And it’s this ethnological situation of knowledge which I wanted to reconstruct.

Like looking at yourself in a mirror, as if a stranger to yourself?

There is a difficulty here that’s obviously very great, because, after all, how can we know ourselves if not with our own knowledge? It’s only by using our own categories of knowledge that we can know ourselves. And if we wish to precisely know these categories we ‚re in a situation that’s obvously very complex. It takes a complete twisting of our reason of itself to able to re-examine itself as a foreign phenomenon. It requires going outside itself in some way and returning… And it is the beginning of this endeavour I ultimately undertook.

What ethnicity or nationality would the ideal ethnologist be?

Well, we could say a good ethnologist of our own culture might be Chinese, Arapesh or Nambikwara. However, with what category and framework of thought could this Chinese or Arapesh know us if not with frameworks of thought hat are ours? So perhaps we could still do this best. If we could thus twist at ourselves as through a mirror. We might, after all, be capable of doing this task and undertake this ethnology of our own culture. We could obviously dream of a Martian whose thougt would be able to entirely capture our own. This Martian could undoubtedly know us best. But this probably isn’t possible since, as far I know, Martians don’t exist.

You teach philosophy, is this a philosopher’s outlook or the contrary?

It’s quite difficult to define what philosophy is currently. For a long time, I think we can say basically up to Sartre … (Sartre included?) Yes, Sartre included. Philosophy was an autonomous discipline, I was going to say closed in on itself, but that’s not right, since philosophy has always thought about cultural subjects that were proposed to it from elsewhere. It thought about God because theology proposed it. I also thought it about science because the whole system of our knowledge proposed this. Philosophy was an open discipline, but it had iits own methods, its own forms of reasonings and deductions. It seems to me philosophy is now disappearing. When I say it’s disappearing, I don’t mean we are coming upon an age where all knowledge eventually becomes positive. But I believe philosophy is being dissolved and dispersed into a whole series of activities of thought of which it’s difficult to say whether they are strictly scientific or philosophical. We are reaching an age perhaps of pure thought. After all, a discipline as abstract and general as linguistics, a discipline as fundamental as logic, an activity like literature, since Joyce, for exemple… Well, all these activities activities are perhaps of thought and they serve as philosophy. No that they take the place of philosophy, but they’re the very unfolding of what philosophy once was. 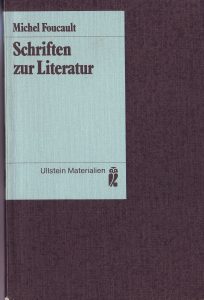 I believe that Man has been, if not a bad dream, a spectre, at least a very particular figure, very much historically determined and situated in our culture.

You mean it’s an invention?

It’s an invention! In the 19th and first half of the 20th century it was believed that Man was the fundamental reality of our interest. One had the impression that the search for the truth about Man since the Greek age had animated all research, perhaps of science, certainly of morality, and for sute of philosophy. When we look at things more closely, we have to wonder if this idea of Man as basically always existing and as there waiting to be taken up by science, by philosophy, by us. We habe to wonder if this idea isn’t an illusion, an illusion from the 19th century. Actually, until the end of the 18th century, roughly until the French Revolution we never dealt with Man as such. It’s curious that the notion of Humanism that we attribute at the Renaissance is a very recent notion. You can’t find the term ‚Humanism‘ earlier because Humanism is an invention of the 19th century. Before the 19th century, it can be said Man didn’t exist. What existed was a number of problems, a number of forms of knowledge and reflection, where it was a question of nature, a question of trooth, a question of movement, a question of order, a question of imagination, a question of representation, etc. But it wasn’t actually a question of Man. Man is a figure constructed near the end of 18th and beginning of the 19th century, whichb gave rise to what has been and still are called the human sciences. This new notion of Man invented at the end of 18th century also gave rise to Humanism, the Humanism of marxism, of Existentialism, which are the most obvious expressions currantly. But I believe that, paradoxically, the development of the human sciences is now leading to a disappearing of Man rather than an apotheosis of Man. Indeed, this is happening now with the human sciences. The human sciences did not discover the concrete core of the individual, positive kinds of human existence. On the contrary, when you study, for example, the behavioral structures of the family, as Lévy Strauss did, or when you study the great Indo-European myths, as Dumézil, or when you study the very history of our knowledge, you discover not the positive truth of Man. What one discovers are great systems of thought, of large formal structures which are like the soil in which individualities historically appear. This is why thought nowadays has entirely reversed from a few years ago. 9:22 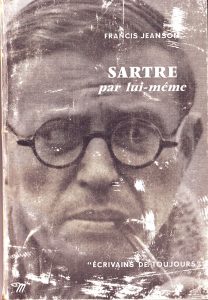 I think we are currently experiencing a great break with the 19th and early 20th century. This break at bottom is experienced as not a rejection, but a distance from Sartre. I think that Sartre, who is a really great philosopher, but Sartre is still a man of the 19th century. Why? Because Sartre’s whole enterprise is to make Man in some way adequate to his own meaning. Sartre’s whole enterprise consists in wanting to find what in human existence is absolutely authentic. He wants to bring Man back to himself, to make Man the possessor of meaning, that could escape him. Nevertheless, Sartre’s thought is situated in philosophy of alienation. Whereas, we wish to do the opposite. We want to show not what is individual, what is singular, what is truly experienced as human, but a kind of glittering surface on top large formal systems and thought must now reconstruct these formal systems on which float from time to time the foam and image of human exístence. 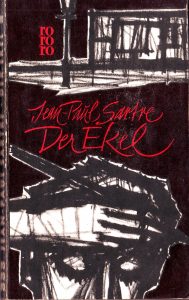 Let me ask a question. How can any political outlook stem from your work?

Of course, this is probably the question posed to all forms of reflection that are destroying a myth and haven’t yet reconstructed a new mythology. For example, for a very long time, philosophy and theology maintained a kinship, where the role of philosophy was to define what morality or what policy we can and should deduce from the existence of God. When philosophy and the culture discoveres that God was dead, it was immediately proclaimed „If God is dead, all is permitted“ and „morality isn’t possible“. „If God is dead, what policy should we adopt or hope for?“ But experience has proven that moral and political reflection never had been more alive, more rich and more abundant than it had the moment we kne God was dead. And now that Man is disappearing, the same question is being raised, that had been formerly raised for God’s death: „If Man is dead, everything is possible!“ Or more precisely, we’ll be told that all is necessary. Whart was discovered by the death of God, what was discovered by this great absence of a supreme being was the very spave for freedom. What’s now being discovered by the disappearance of Man is a small gap left by Man which arises in the frame of a kind of necessity, the grat web of systems towhich we belong and are said to be necessary. Well, it’s probable that just there’s a space for freedom left by the death of God for grand political systems, grand moral systems, like Marxism, like Nietzsche, like Existentialism, to be build, so, we may see arise above this grid of necessities we’re now trying to navigate great political options, great moral options. I must say, even if wie don’t see it arise, after all, no one can prejudgethe future, it doesn’t matter if we don’t. It is being discovered in recent years that literature is no longer made to amuse, nor music just to provide visceral sensations. Well, I wonder if we won’t notice that thought can do something other than prescribe to people what they have to do. It would be quite nice if thought could come to entirely think itself, if thinking could unearth what is unconscious in the very depth of what we think.14:14