In 1969/1970, ethnomusicologist Hugo Zemp recorded a number of local songs which were released on an LP in 1973, as a part of the UNESCO Musical Sources collection. One of the songs, a lullaby named „Rorogwela“, sung by Afunakwa, a Northern Malaita woman, was used as a vocal sample in a 1992 single „Sweet Lullaby“ by Deep Forest, becoming a worldwide hit, but also causing some controversy over perceived „pillaging“ of the world music heritage by Western musicians. A lesser-known use of the song is in the track „Death Lullaby“ by „Rorogwela“. The artist (whose identity is not certain) obviously took the name from the sample used. As opposed to Deep Forest’s track, „Death Lullaby“ is a harsh noise song with elements of „Rorogwela“ used towards the end. The track appears on Susan Lawly’s compilation album, Extreme Music From Africa In 2005, the song gained renewed exposure when it was featured in Matt Harding’s Where the Hell is Matt? viral video. The video featured the „Nature’s Dancing 7“ Mix of the song. In 2008, Harding traveled to the Solomons island of Malaita to try to find Afunakwa, the woman who is thought to be the performer of „Rorogwela“ on Zemp’s recording. According to Harding’s follow-up video Where the Hell is Afunakwa?, Afunakwa had died in 1998. The lyrics to Rorogwela translate to: Young brother, young brother, be quiet You are crying, but our father has left us He has gone to the place of the dead To protect the living, to protect the orphan child 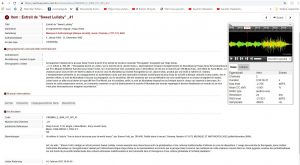 Hindewhu is a style of singing/whistle-playing of the Ba-Benzélé pygmies of Central Africa. The word is an onomatopoeia of the sound of a performer alternately singing pitched syllables and blowing into a single-pitch whistle made from the twig of a papaya tree. Hindewhu announces the return from a hunt and is performed solo, duo or in groups. http://en.wikipedia.org/wiki/Pygmy_mu… From the ethnomusicology LP The Music of the Ba-Benzélé Pygmies, recorded by Simha Arom and Geneviève Taurelle in 1965 and released by Bärenreiter-Musicaphon in 1966. Part of the series An Anthology of African Music, in the UNESCO Collection of Traditional Music of the World. http://www.discogs.com/Ba-Benzélé-Pyg… Photo by Simha Arom, taken from the album’s liner notes. Adapted by percussionist Bill Summers (by blowing into a beer bottle) in Herbie Hancock’s Watermelon Man, https://youtu.be/4bjPlBC4h_8, and Michael Harriton in Congo Melody, https://youtu.be/LFMEpOJ7JFQ, from the soundtrack to the turn-based strategy video game Civilization: Call to Power (Activision, 1999).